The 183-Day Rule: 5 Things to Know When Establishing State Residency and Fighting Audits

You may have seen my previous blog post about moving to a new state and establishing a new domicile there. That is one hurdle to overcome when moving out of state. Your former state may challenge that you’ve established a domicile in your new state, which means an audit. Once you’ve cleared that hurdle, you need to continue to regularly track your presence and travels against the 183-Day Rule because, although you’ve successfully established your new domicile, your former state may challenge how much time you’re spending there, whether you’re actually living there. And they can do this for years after you’ve established your new domicile.

Many jurisdictions use this day count limit, which amounts to just over half a year, to determine whether such an individual should be viewed as a resident for tax purposes. In other words, if you’re spending even a fraction of a day more than six months in a location where you happen to have unrestricted access to a dwelling, the state views you as a full-time resident whether or not you actually avail of the benefits of such a home. In states like New York and California, collecting income taxes from individuals who are unable to prove that they did not cross the 183 day threshold has become a big revenue driver. New York, for example, collected $1 billion from residency audits from 2013 – 2017, which is 4 times more than S Corp/Partnership audits.

The cost? If someone spends more than 183 days in New York, for example, and has access to a home there, New York expects to collect state and local taxes on all their income, regardless of whether any part of it was earned in New York. This generally amounts to tens of thousands of dollars for New York residency audits, and it’s not uncommon for settlements to reach hundreds of thousands and even millions of dollars.

The 183 day rule seems straightforward, but there are many nuances to consider when tracking your days. It’s advantageous to better-understand this rule and some of the details around establishing residency and being prepared for state residency audits.

Here are the top 5 things to keep in mind as you track your days. Always remember that residency requirements can vary by state — some states have created their own flowcharts to help residents determine whether they should declare themselves residents or nonresidents for tax purposes — so be sure to speak with your CPA or lawyer to understand how it applies to you.

1. States can consider you a resident, even if your permanent home is elsewhere

Domicile is a legal term defined by, “where an individual has his true, fixed, permanent home and principal establishment, and to which place he has, whenever he is absent, the intention of returning.” Your domicile, or legal residence, is your true home or main residence. You may have multiple residences at one time, but only 1 domicile. You can’t choose to make your home one place for general living purposes and in another for tax purposes. Your legal residence is usually where you maintain your most important family, social, economic, political, and religious ties, and it depends on all the facts and circumstances per case, including good faith.

Fundamental to the 183 day rule, however, is the fact that states to which you frequently travel may consider you a resident, despite your domicile being elsewhere. For example, you may consider your full-time home to be in Texas. You grew up in the state and your kids go to school there, but you own an apartment in New York City and found yourself in New York — anywhere in New York — 190 days last year. That means that New York State will come knocking to claim its full share of all your income in taxes, despite your home state of Texas requiring no income tax. Going over the 183 day limit is a hard lesson that can cost thousands, if not millions, in additional tax dollars.

2. Any amount of time can count as a day

New York is especially tricky given how frequently people commute in and out of the city in the tri-state area. Your full-time residence may be in Connecticut but if you work in New York and keep an apartment there, you have to proceed with extra caution. When it comes to determining residency, any amount of time spent in New York counts as a day. Meeting a friend for a lunch in midtown? Counts as a day. Business meeting in Westchester? That’s a day. Doctor’s appointment on the Upper East Side? Also a day. Did you cross midnight? That’s two days.

For that last example about midnight, it is important to note that for residency, any time of day counts. It’s not just regular business hours. And this problem easily and unknowingly trips up many taxpayers everywhere. Also, auditors may ask you to account for your whereabouts throughout a particular day. Proving that you were in Connecticut on a particular morning may not satisfy, say, a New York City auditor who would still argue that you may have come into the city that afternoon. Lastly, another important aspect of the rule with regard to time — weekends and holidays count, too.

“Because the guidelines are so strict, (I tell my) clients to put ‘ten days in the bank’ in case something happens at year-end to force them to be in New York longer than planned,” says New York City tax attorney Fred Feingold.

All of this comes into play on the flip side, too, where someone may be trying to establish domicile in a state to which they just moved. They need to show as many days as possible in that state. An example of where this could be difficult: someone leaves New York and is trying to change their domicile to Florida, but during the year they moved, they didn’t spend a lot of time in Florida. Maybe they were still in New York a lot — more than in Florida — or maybe they were busy traveling the world, etc. If the total days in Florida are too low, it would make it very difficult to justify that Florida, not New York, was indeed their new domicile and that they shouldn’t be taxed in New York even if they spent less than 183 days there. This is why it is so important to have an accurate, real-time count of your days in different states. You can plan better, not be caught off-guard, meet your goals and avoid an audit.

Legal experts urge their clients to keep careful track of where they live, work and spend their time, but also to be cognizant of the complete picture of their lives that they’re painting.

In California for example, the state wants to know the exact amount of time you spend in California but they also put significant focus on why you spend time there. In fact, the purpose of time spent in California may have more weight in determining legal residency than the actual number of days spent. To classify as a nonresident, an individual has to prove that they were in the state for less than 183 days and that their purpose for being in the state was temporary. If you’re a basketball player in town for a game, that’s temporary. If you’re visiting for work or to spend time with grandkids, that’s where the purpose may become a little grey.

4. Pay attention to details and exceptions to the rule

There are exceptions to every rule — and the 183 day rule is no exception! Keep a close eye on factors your state reviews when tallying the 183 days. For example, for married couples, each person’s days are counted separately.

In the midwest, you could spend 183 days in Minnesota but if you’re a resident of North Dakota or Michigan, you don’t need to worry about the extra tax bill. Those states have a tax reciprocity agreement with the state of Minnesota.

In New York, any amount of time in the state counts as a day, but an exception is airport travel. More specifically, “The counting of a day in New York is disregarded if it is solely for boarding a plane, train, ship or bus for a location outside New York, or continuing travel which originated outside the state by automobile, plane, or train to a destination outside the state.” If you land in JFK and drive straight to your home in Connecticut, that won’t count as a day. If, however, you stop anywhere along the way for dinner before heading home, plan on adding another day to your tally.

Members of the military who are stationed in a state with a permanent home elsewhere don’t need to worry about the 183 day rule. Treatment in a hospital, not including outpatient services, is generally disregarded in the 183 day count.

Counting your days can be tedious and most taxpayers fail to produce better records than the state in a residency audit. In New York state, for example, the majority of non-residency audits result in the taxpayer owing more to the state because they couldn’t prove they were a nonresident.

Make sure the data you’re keeping is strong enough to prove your whereabouts. That’s why we built Monaeo. Manaeo is a personal audit defense system that counts your days for you and creates a digital record that’s accepted in residency audits.

This information can be used proactively to track and better plan your travel so that you avoid residency tax issues. The app will also alert you as you approach state residency thresholds. In addition, Monaeo data is audit-proven. Clients who have used Monaeo’s data in audits have had 100% success rate in defending their non-residency or part-year residency status. We’ve helped clients save more than an estimated $100 million dollars to-date. If you’re juggling multiple residences and worry that you may be at risk of a residency audit, don’t rely on paper receipts and your calendar. Auditors have an arsenal of legal and digital tools at their disposal. That needs to be met with credible data and digital records to show concrete proof. It’s the only way to have peace-of-mind and a solid audit defense. 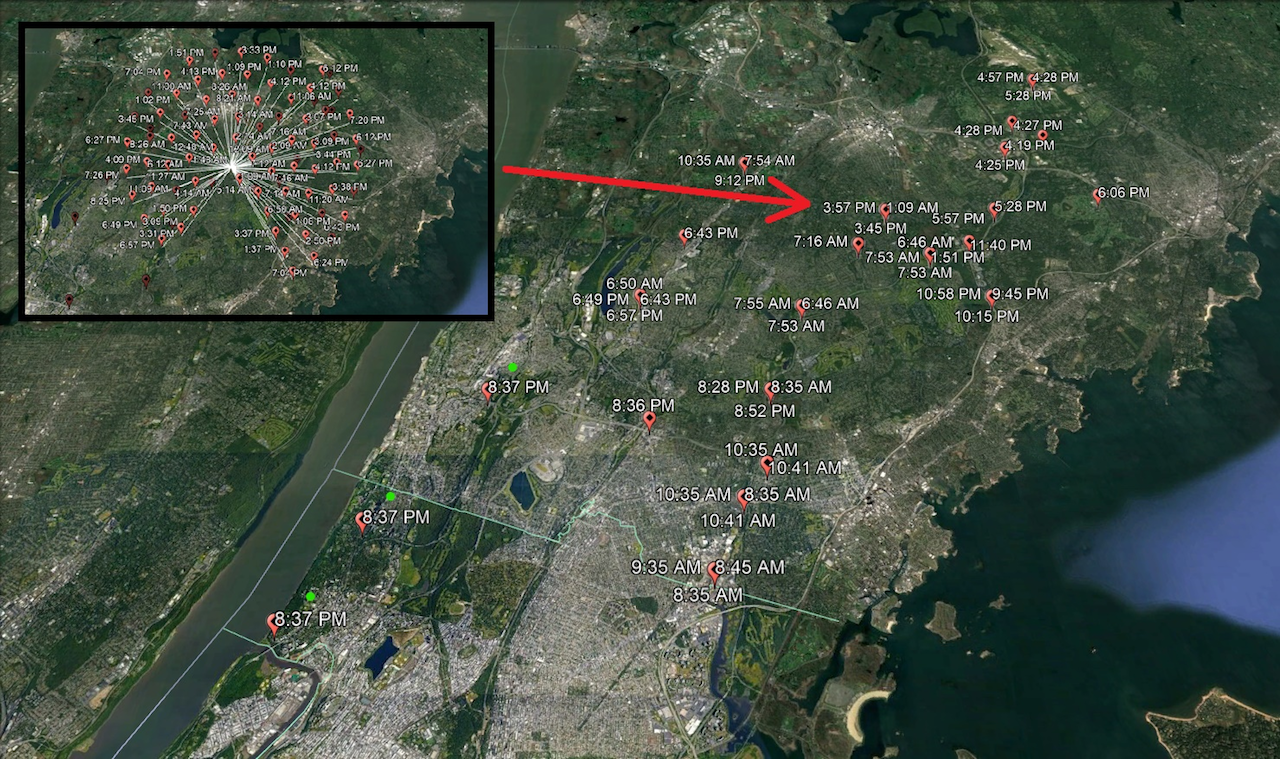